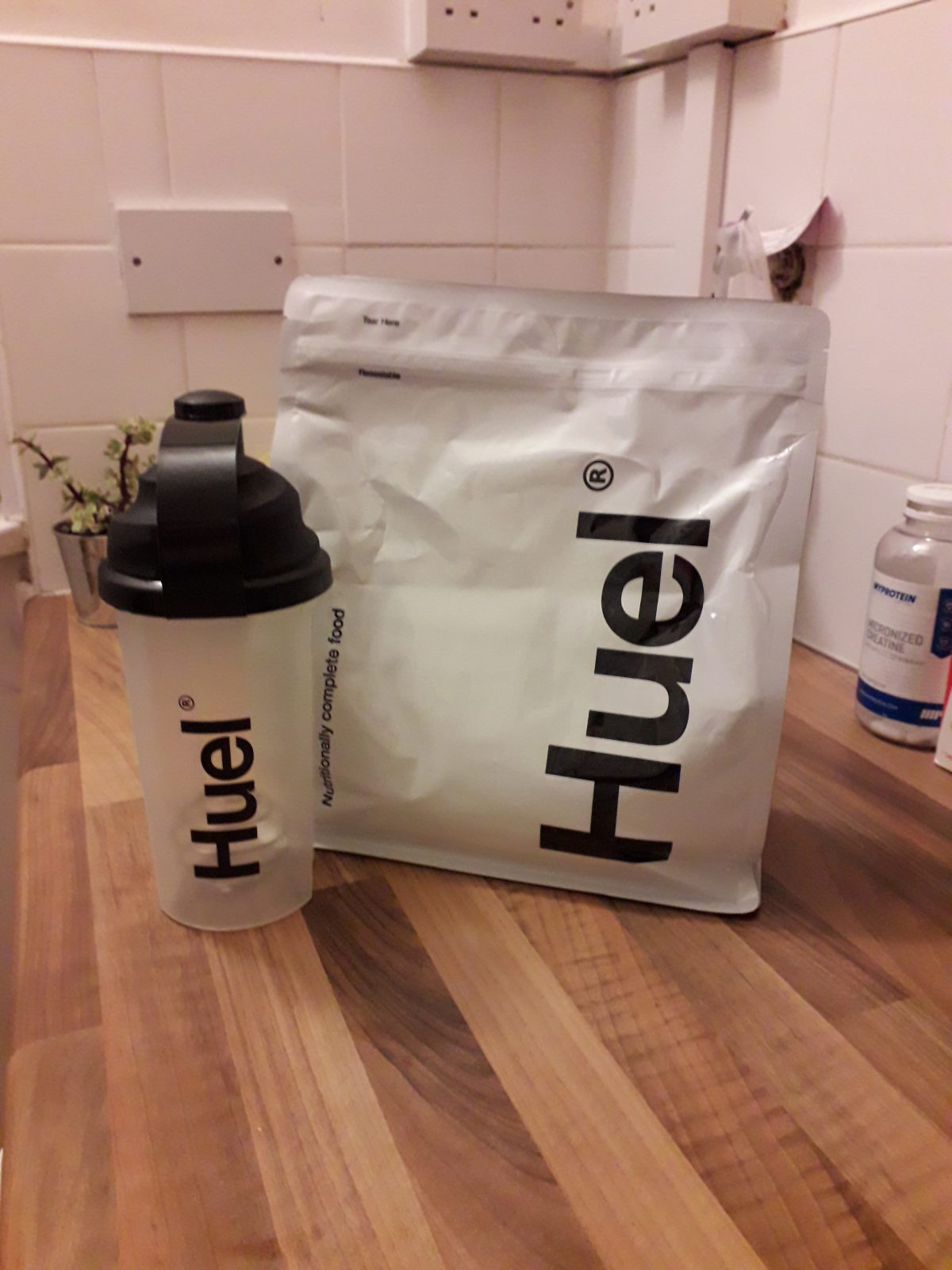 I decided to to give Huel a try as a way to gain greater control of my diet, and to simplify keeping on top of my macros and calorie count.

Although I generally have a pretty healthy diet and an active lifestyle, I do feel like I often tend to eat much bigger portions than I should. I’m also a chronic snacker, and never really pay attention to the calories I’m endlessly consuming throughout the day.

Getting Started With Huel

I initially wanted to spend a week eating nothing but Huel, but some very cynical friends convinced me this was a terrible idea. I decided to ease myself into it instead and swap out just a couple of meals each day.

Below you can read about my experience with Huel.

I’ve included my food diary alongside how much exercise I did each day. This is to give an accurate representation of how I used Huel. This is also to show that although I lost a small amount of weight using Huel, that this could have been due to other factors.

Before you get to the two week diary, I’m going to share some of the things I’ve learnt so that you don’t have to read this article to the end if you just want the highlights.

Mixing Huel with water always left me feeling less satisfied than when I used a plant-based milk. If you are replacing ALL of your meals with Huel, then I would definitely not suggest using water.

Even better were the times I blended Huel with fruit and / or peanut butter. A frozen banana, a scoop of peanut butter, and 500ml of nut milk blended with 3 scoops of Huel was the best way that I found to enjoy this product. This was made even more delicious if I left it to sit overnight.

I found the convenience to be one of the best things about Huel. Making a shake in the morning meant not having to think about preparing breakfast, which is something I would usually do the night before (overnight oats addict).

It was also easy to prepare a shake to have after the gym or between work appointments, which meant I saved time and money not dashing to the shop throughout the day.

Huel changed the way I shop for food. I started buying fresh food for one or two meals at a time on my way home each evening, which was more fun and less stressful then trying to do bigger weekly shops. My tiny kitchen became much less chaotic and more colourful. 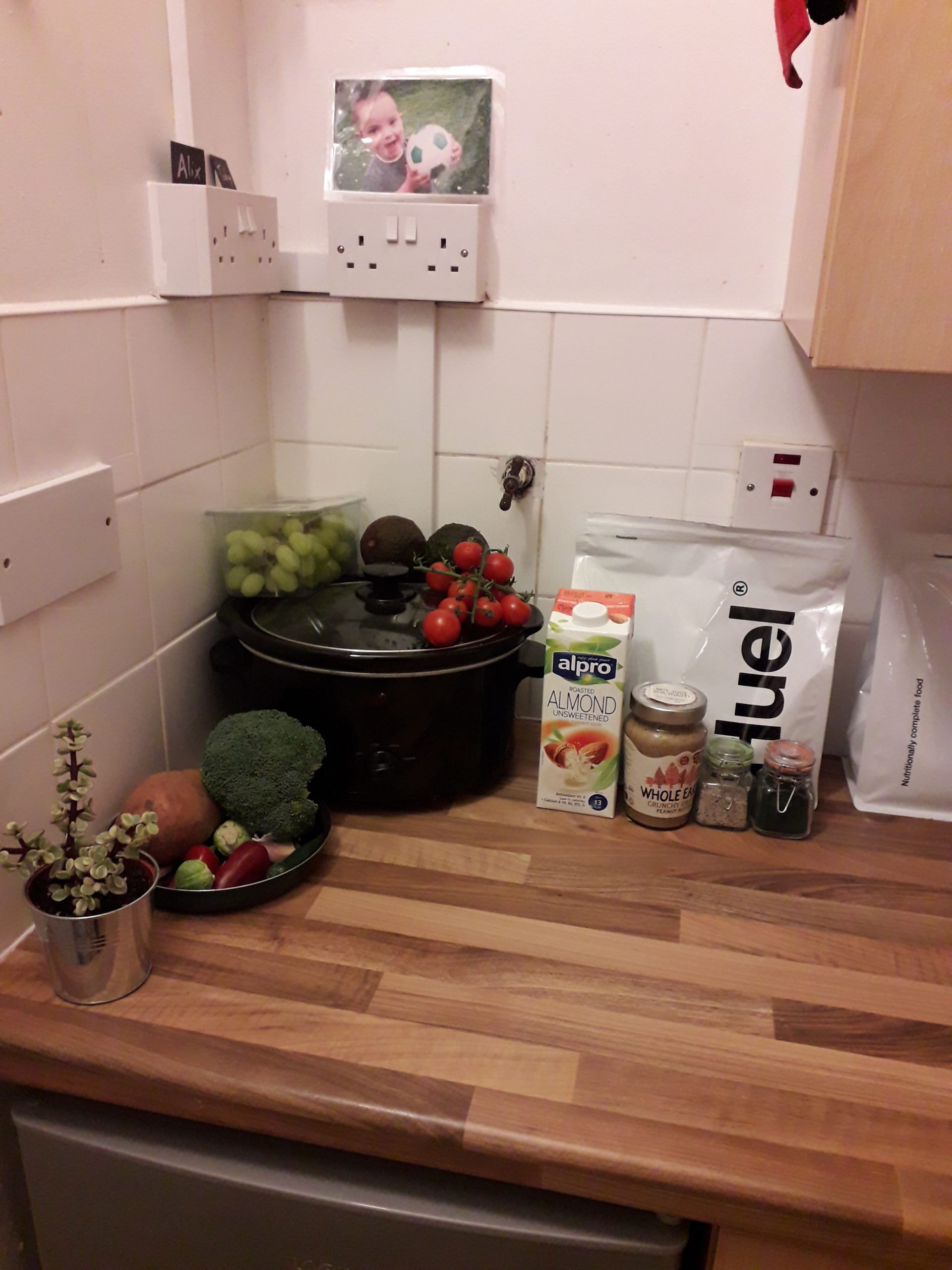 I have definitely saved a whole bunch of money by using Huel. A shake costs about £1.45, or even less if you buy loads at the same time. Also, if you buy directly from the company website then you can get 10% off by subscribing to a regular delivery.

A lot of people who have reviewed this product online stated that they experienced some digestive discomfort, more regular pooping, and excess gas.

None of these things happened to me, and I’m a bit sad about that. I was looking forward to over-sharing with absolutely everyone who made the mistake of asking. At a guess I would say that this is because I already adhere to a plant-based diet, so there wasn’t much of a shock to my system.

Disclaimer – I’m not affiliated with Huel in any way, or connected to any of the other products that I’ve mentioned in this article. Links are included as a means of sharing information and recommendations with you.

HOWEVER if you want to order some Huel yourself and would like a £10 discount on your first order then you can click here.  I’ll also get £10 off my next order if you do this, so thanks for that!

I collected my package from Doddle in the evening (never knew Doddle was a thing before – how useful). I had my first vanilla shake about 18:00 before I went to the gym and really loved the flavour and consistency. It definitely felt more like drinking a meal than I thought it would.

I went to see a friend after the gym and came home around 22:00 pretty hungry. I ate the last of the trash snacks in my house and unplugged my fridge (as it’s now empty and saving electricity is my jam).

On most week days I run a community cafe project during the day time, which basically means I’m surrounded by delicious vegan food all day. I thought this would make it really difficult to be more strict with what I’m eating, but after taking more than an hour to drink my breakfast Huel shake, I was full until lunch.

I posted on Instagram asking for advice and loads of people sent suggestions about the best ways to prepare Huel, such as blending with a banana, or leaving in the fridge for a while before drinking. Some people also had a few negative things to say about the flavour and the consistency, but this was mostly about the unflavoured variety.

Exercise –  I did a cheeky 15 minute shoulder workout whilst I was waiting for a client.

End of Day Feels: Maybe I drink too much coffee.

Exercise – Today I was working at the gym all day (09:30 – 19:30) so I was moving around a lot. I also went to an hour long endurance circuit training class after my shift and did lots of lunges around the gym to stay warm throughout the day!

End of Day Feels: I’m going to stock up on plant-milk so I don’t have to drink any more shakes with water.

Today I was working at the gym for eight hours (12:30 – 20:30). I had my breakfast shake at 09:30 and it kept me full until my first class finished at 13:30. The second shake left me almost uncomfortably full and I snacked on the nuts about an hour later.

Exercise – I didn’t do any deliberate exercise today besides lots of walking around on a mission before work and my usual activity in the gym during the day.

End of Day Feels: Today I felt like I would have been happy with a 3rd shake in place of solid food during the day, but I didn’t have another portion with me. Feeling pretty worn out at the end of the day but that’s fairly normal after a full day at work.

I left my plastic shaker thing at the gym last night so I had a real struggle to get the lumps out of my morning shake. I gave up trying to drink the lumpy mess after a few sips. I was back at the cafe today though, so when I arrived I blitzed the rest of my shake in the blender with some frozen banana and berries plus some extra soy milk. This was my favourite Huel creation so far.

Exercise – I played a friendly game of basketball for an hour.

End of Day Feels: I’m feeling pretty down today but I think that’s more to do with my T levels being low then the changes to my diet.

Today I did a five hour shift at the gym and only took Huel plus a protein shake with me. I think adding the chia seeds to the morning shake is a good way to help with satiety. I did this by putting a tablespoon of chia seeds in the milk the night before, and then adding the Huel powder in the morning.

End of Day Feels: Still not feeling great but my energy levels are good and I generally felt quite full throughout the day.

Today I’ve been using Huel for a week so I went to one of those little machines at Boots to weigh myself first thing in the morning. I’d lost 0.3kg, which is just over half a pound. It also told me that my body fat is at 14.9%.

Mood: My mood is all over the place at the moment but it still feels like a testosterone dip more than anything else!

Energy levels: 7km is the most I’ve ever ran at once and I felt pretty good last night afterwards. Getting up in the mornings has also felt much easier recently. After a week of generally substituting half of my meals each day with Huel, I’m feeling really good about it and have no plans to stop.

Exercise – I did a 30 minute home strength training workout.

End of Day Feels: Today I had a really fun day at the gym and my energy levels were higher than usual.

Exercise – I was really in the mood to work out today but I was too busy with work! BUT the majority of this work was in the gym (training clients, running classes & cleaning) so I was staying active all day anyway.

Lunch – Homemade Biscoff Cookies + Coffee + quinoa & chickpeas. I’ve also been eating Biscoff spread out of the jar with a spoon and I can’t be stopped.

Dinner – Quinoa with broccoli & Brussels sprouts & mushrooms & half an avocado

Exercise – I played basketball for an hour and then did an upper body workout at the gym.

Exercise – Today I did my first Park Run (5km) in Preston Park and then ran to work + a biceps / triceps / abs workout after my shift. I still felt pretty energised throughout the day and I’m finally in a good mood again too.

I weighed myself again with the same machine at the end of the two weeks. My weight was mostly the same, but my body fat was apparently down to 14.2%. However, it’s probably worth noting that when I weighed myself the first time I told the machine I was female and the second time I picked male.

I’ve had a really positive experience of adding Huel into my diet over the last two weeks and I’ve just ordered a load more. My friends have been making fun of me and telling me that it’s not real food, but I feel just as energised and healthy as I usually do. I’ve also saved loads of time, and money, and spent MUCH less time doing the washing up.

I feel like I’ve been paying much more attention to how much I’m eating, and also snacking on sugary things much less (although I’ll never fully break up with Biscoff spread).

My exercise and activity levels were the more or less the same as usual during this time, and I think that if I did deliberately want to lose weight or bulk up, then it would be really simple to use Huel to do so.

If you have any questions or comments about this post then feel free to reach out to me anytime! And remember, you can click this link to get £10 off your first order of Huel.